Kuroshio Town
ーThe Town Bearing the Name of the Ocean Riverー

The name Kuroshio, while being known as Japan’s largest current, is also the world’s largest ocean current.

Far from the equator, coming off of the Philippines and washing from south to north along the Japanese Archipelago, it then heads east, into the central part of the Pacific Ocean.
It has a width of about 100km, a depth of 1,000 to 2,000m, and the flow rate that reaches about 4 knots (2m per second, 7.4 km/h). Just like black flowing ink, the great meandering current rises up to the North Western Pacific Ocean like a great river. The flow rate is 40-50 million tons per second. It is 200 times larger than the world’s biggest river, the Amazon (flow rate of about 20 t/s). It is one big ocean river.

In the old days it was called Kurose River, and fishermen were afraid of being trapped in it. John Manjiro, who was born in Hatagun, present day Tosashimizu City, was carried along by the Kurose River and went on to experience many outlandish adventures.

Kuroshio Town is a small town located at the western end of Shikoku/Tosa running along the Kuroshio. Even though it was named for the large Ocean River, truly it is a small town. 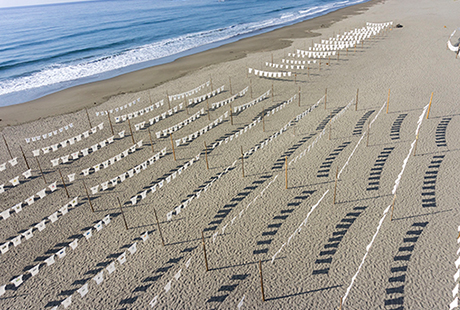